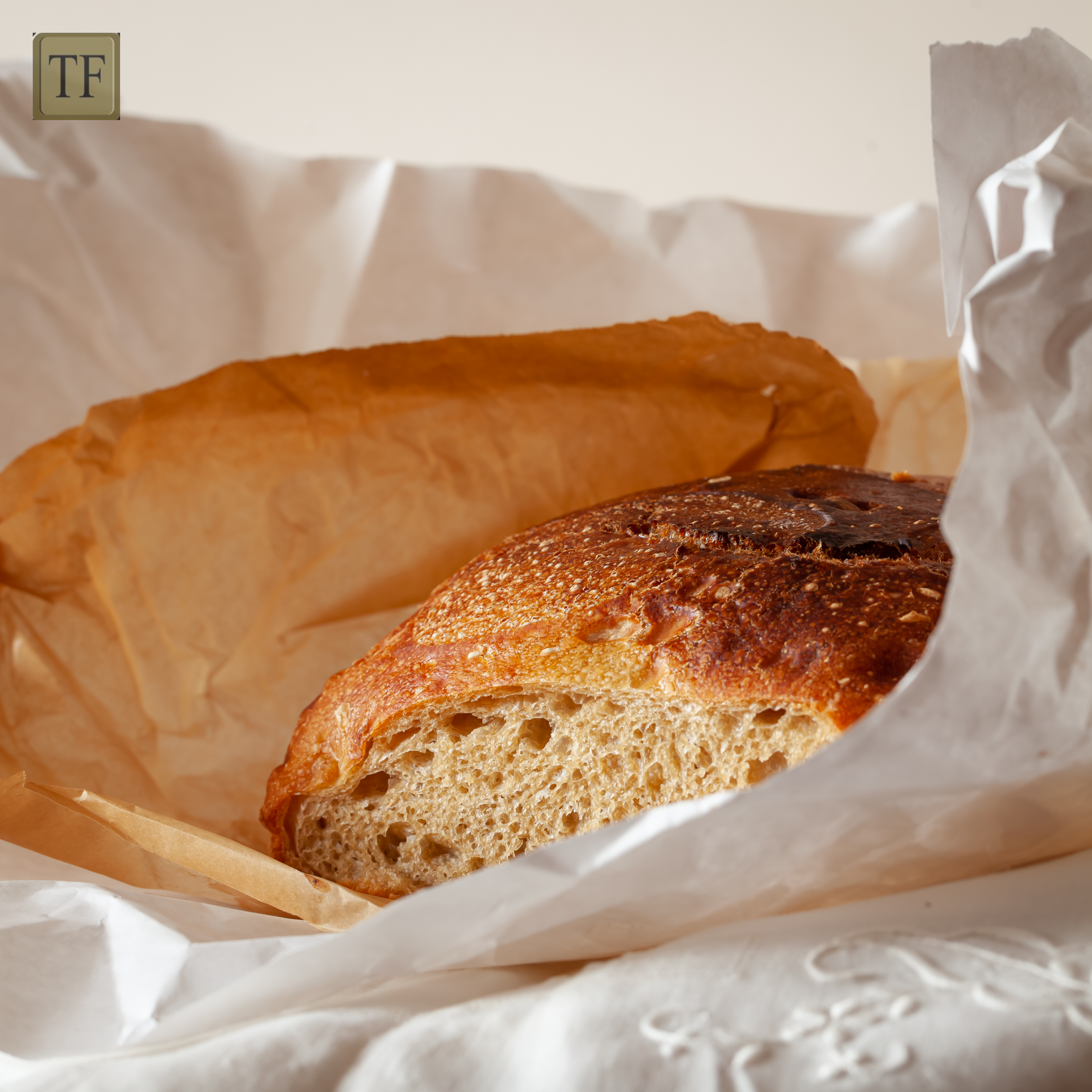 This recipe for Pain a l’Ancienne French bread is our master recipe for French bread, baguettes, ciabatta and pizza. It’s an easy, foolproof recipe that makes a bread that rivals the bread we found in Paris and the pizza in Italy.

The French bread in France is truley incredible, with a soft interior and a crusty exterior. Pain a l’ancienne French bread gets it’s name by referring to an ancient way of making bread by allowing it to raise for a long time in a cold place.

We have tried for years to make something comparable, but without success, until we discovered this method. We make up a batch of dough in just a short time with very little work and put it in the refrigerator overnight. The overnight refrigeration allows the bread to rise slowly, improving the flavor, and creating a dough that doesn’t need much kneading. It is much easier than making bread using a sourdough starter and has a more nutty, buttery taste than sourdough. This recipe makes one large French bread boule, one ciabatta loaf, two baguettes, two medium pizzas or four mini baguettes that can be baked on different days, anytime in the next four days. We make up a batch of dough almost every week and decide at the last minute what it will be. The ciabatta and pizza are made by adding olive oil – we usually use our homemade garlic olive oil. Variations can be made by using different oil and coating with different nuts or seeds. We have used this recipe for everything from Flammekuchen to seeded baguettes.

Tried this recipe?Let us know how it was!
FLAMMEKUCHEN
bread topped with sauted onions, creme fraiche and cheese
Check out this recipe

We are celebrating the return of the Olympics with sunflowers by using sunflower seeds in our baking. This is the recipe for our sunflower seed baguette. Sunflowers from the Miyagi area of Japan are featured at the Olympics. The organizers said that after the earthquake and tsunami, the parents planted sunflowers on a hillside in Miyagi in memory of their children who died, and every year now the hill becomes covered with sunflowers. #Olympics #sunflowers #Olympicsunflower #food #bread #sustainable #climatechange #baguette #sunflowerseeds @kingarthurbaking @terrasoul @diamondcrystalsalt @redstaryeast #redstaryeast
FINNISH COOKIES ⁠
GROWING HERBS ⁠
SANTA CRUZ COUNTY WILDFIRE DAMAGE. Last year, a forest fire in northern Santa Cruz county, the CZU lightning complex fire, burned 86,000 acres. It was stopped as it reached the University of California, Santa Cruz campus north of Santa Cruz, where we live. As we are again in fire season, we felt it would be a good time to post a few photos we took of the area that was devistated by the fire last year. #SantaCruz #California #wildfire #forestfire #fire #environment #climatechange #climatechangeawareness
PAIN A L'ANCIENNE FRENCH BREAD - Everyone is always asking us for our secret pizza and bread recipe. Now it's no longer a secret. This recipe for Pain a l’Ancienne French bread is our master recipe for French bread, baguettes, ciabatta and pizza. It’s an easy, foolproof recipe that makes a bread that rivals the bread we found in Paris and the pizza in Italy. Click our link in bio to see the recipe. ⁠
Flammekuchen in Strasbourg France - The Strasbourg version of pizza. We made it when we got home and have posted the recipe on our blog (Link in Bio).⁠
STRASBOURG FARMER’S MARKET - We were able to catch a farmer’s market while visiting Strasbourg, France. A farmer’s market is a great place to get a feel for the local town, check out the food and talk to local people. ⁠
HOW TO MAKE SOUR CREAM - Sour cream is really very easy to make. Just pour cream into the yogurt maker, add the starter culture and turn it on. That’s it. ⁠
BROWNED BUTTER MACADAMIA NUT WHITE CHOCOLATE CHIP COOKIES - Our entry for the best chocolate chip cookie contest. We file this under pantry items because we make up the cookie dough ahead and bake them two at a time. Check out the recipe by clicking the link in our bio. We have also included tips for making this eco-friendly.⁠
HUMMINGBIRDS AT THE UCSC ARBORETUM⁠ We just posted no re photos on our blog (Check the Link in our Bio).
ICE CREAM IN AIX EN PROVENCE⁠ - we found incredible ice cream in France, and were able to make it with Creme Fraiche when we got home. Check out the recipe in the Link in our Bio.
FRENCH VANILLA ICE CREAM - We made the most incredible French vanilla ice cream I have ever had. Better than anything we had found in Paris. I was stunned. ⁠
Loading Comments...
%d bloggers like this: