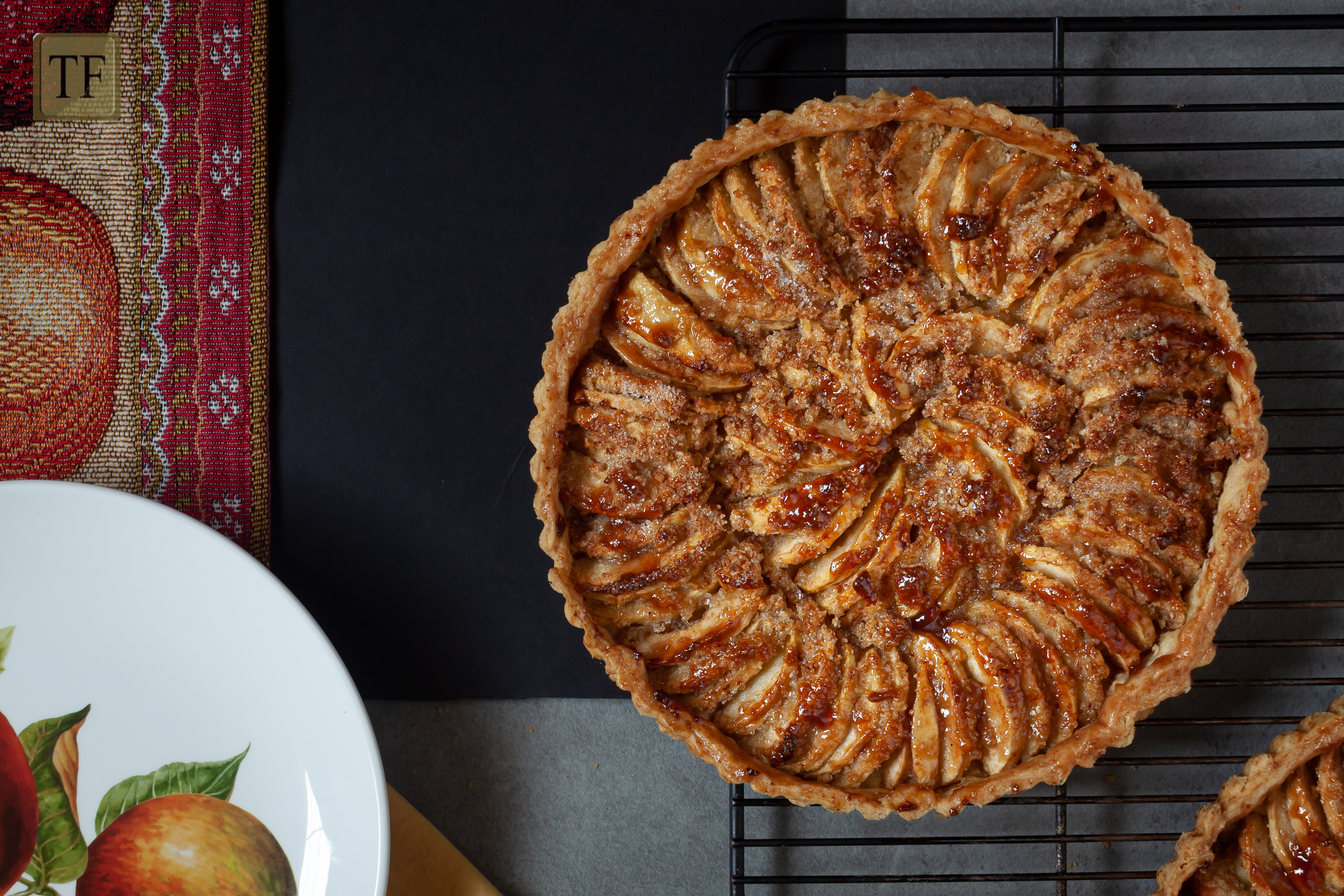 Santa Cruz, California. Autumn. We are headed to apple country to look for apples for a rustic apple tart. Not many people think of Santa Cruz as an apple growing region, but apples are actually a very important crop in this area. Watsonville, the town at the south end of Santa Cruz County, is home to Martinelli’s, the sparkling apple cider company.

The weather near the ocean gives this region the perfect climate for the tart apples needed for cider. It also gives us access to a variety of apples for making apple tarts. Some of the local farms in the area are open for a visit this time of year and sell apples at their stands. Buying apples for an apple tart is a great excuse for a drive in the country.

NOTES ON THE INGREDIENTS FOR THE APPLE TART:

Even though I grew up on Gramma’s apple pies, I prefer making tarts. We both like the ratio of apples to crust and the way an open faced tart bakes the apples to a golden brown. I use a crust that is more like an American pie crust than a French tart cookie crust, so this is more of an American, or even rustic tart.

This is an all butter crust with half of the butter browned, to give the crust a richer taste. I brown the butter ahead of time and then store it in the refrigerator to harden it up. Browning it removes some of the water, so I add some liquid back by adding some maple syrup. It’s important to have a dough that is wet enough to be rolled out, but not too much or it will be tough. The alcohol makes rolling the pie dough easier and then evaporates to leave the crust crispy. I use something that goes with the flavor of the pie, in this case bourbon, but any alcohol that is around 80 proof will work.

I am very careful with the measurements for the crust. But the ingredients that are added to the fruit may need to be adjusted depending on the size of the fruit and the sweetness.

NOTES ON HOW THIS APPLE TART FITS INTO OUR PLAN TO EAT BETTER:

We have listed the brands for some of the ingredients because ingredients are everything. We have found that these brands give superior results. And by using brands like Horizon butter and Wholesome sugar we cut our carbon footprint in half and are helping to control climate change.

We use apples from a local farm stand, the farmer’s market, or from a neighbor sharing the harvest from a backyard tree. Locally grown fruit makes all the difference. Farmers who sell locally choose which variety to grow based on flavor instead of how well it survives transport and storage. It is picked when ripe, often just the day before, or the day of the market, so it tastes incredible. Buying local also creates a smaller carbon footprint in transportation, and it helps our local economy, giving jobs to people in our community.

Tried this recipe?Let us know how it was!

Matsoni Yogurt. We made this in the Instant Pot, even though it requires a low temperature for culturing. (Link in Bio) ⁠I really like that you can make real yogurt that has nothing added - just future and milk. We topped it later with blackberries and blueberry powder. (Yes, there is such a thing as blueberry powder - who knew?
Making whipped honey. Our latest blog post. (link in Bio)⁠
Just finished Joanne Chang's cookie class on Masterclass. Followed her recipe exactly. Seriously - measured everything. Came out perfect. So fun! She's great at explaining things. We posted more photos on our blog. Link in Bio. #cookies #food #masterclass #chocolatechipcookies @masterclass @joannebchang @guittardchocolate @kingarthurbaking @horizonorganic @wholesomesweet
New post on our blog (Link in bio). We have started stocking the pantry for the holiday baking.⁠
FALL COLORS - ⁠
OATMEAL COOKIES - We cut our carbon footprint in half and part of it was by eating better. These cookies are a good example. Full of the best ingredients that also protect the environment. Recipe and details on our blog (link in bio). ⁠
We were wondering how tough it would be to make enough changes to make a difference. We found it was not hard at all. Just a series of little things. And it could be done quickly – really quickly! Spoiler alert – it only took one day. And we are living better than we were before!⁠
The butterfly effect is the perfect analogy for climate change. Little things can add up to create climate change that starts a disaster, or stops one. ⁠
MAKING SOUR CREAM IN AN INSTANT POT ⁠
We are celebrating the return of the Olympics with sunflowers by using sunflower seeds in our baking. This is the recipe for our sunflower seed baguette. Sunflowers from the Miyagi area of Japan are featured at the Olympics. The organizers said that after the earthquake and tsunami, the parents planted sunflowers on a hillside in Miyagi in memory of their children who died, and every year now the hill becomes covered with sunflowers. #Olympics #sunflowers #Olympicsunflower #food #bread #sustainable #climatechange #baguette #sunflowerseeds @kingarthurbaking @terrasoul @diamondcrystalsalt @redstaryeast #redstaryeast
FINNISH COOKIES ⁠
GROWING HERBS ⁠
Loading Comments...
%d bloggers like this: